Did You Know Man Flu Is Real? 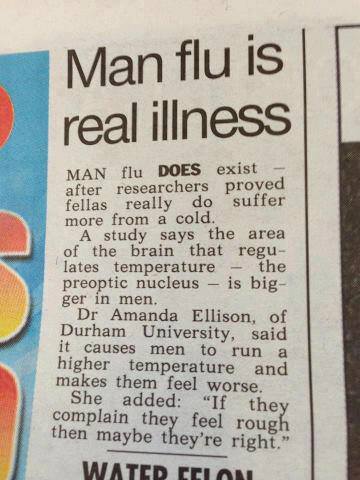 This popped up in my news feed today on facebook, and we all know something you read on facebook and news papers "can be"  a right load of BS, but hey.. im awake, nothing to do, so i decided to google it...

I no doubt see this causing lots of arguments between couples and possibly even employees so i would like to actually stick my nose in on this one because in the past ive been dragged on MANY days out while feeling like i was going to die...

Not many know this but for many years i had NO sense of smell, and when i did it came and went, this lasted up until i was around 10/12...  My ears and my eyes got 10 to 12 years extra brain capacity than most people.  Such as blind peoples sense of touch and hearing.

This has made me notice more and hear more, but that said since the pole shift my ears have felt awful some day's, such as my knees do in certain weather, my ears now to seam to change in certain atmospheric weather pressure.

Anyway.. what i find more interesting about this is not so much the female side having to cut guys a little slack, but its the bosses, managers and work colleges that will probably feel worse, especially when the reasons are known.

In "theory" a guy who only has to shave once every 2 or 3 days is probably going to feel it LESS than a guy who has to shave every single day right? ,  note the  Question Mark and the word  THEORY  (because many of my readers seam to read a little more than what's actually written)

So when the peach skinned boss takes 1 day off.. then gets on your case for needing three days.. just show him your Hairy Legs, Hairy Arms, Hairy Chest and just say....

Look  HERE Mate.. It's not my fault i am biologically and genetically more of a male than you...  (that theory is backed up by the notes on The Telegraph article which also talks about testosterone levels)   So the fresh faced guys who seam to hit puberty yet don't.. ber this in mind  lmfao

So how long till unions or what ever campaign to get men 5 or 6 extra sick days a year.. you know someone's bound to try aren't they....