Many years ago i created some Stargate Interactive CD Rom(s) which i sent to MGM. It also cost me a fair bit of money to ship them over to them.. and they never ever got back to me  :'(
I also made an gta cd rom and then later an Airwolf CD Rom, but that aw cd only ever beta phased with a limited release and was never finalized.

Yesterday i decided to use the same kinda design concept all these years later to put together a sort of "Product Catalogue" for my company. Please note these are just test phase images and i have many other projects on the go (so no release date is planned yet)
Though at some stage i shall be looking for beta testers. 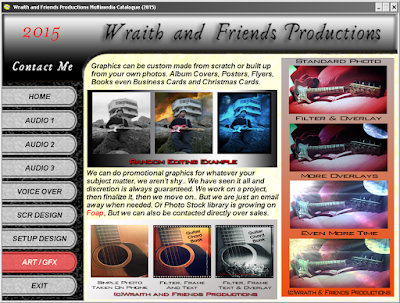 Buttons have visible tool tips (when hovering over them) that also show short cut keys. You can also press H on any screen for specific help box to appear. We can hide screens that need a key combo to access and even lock them so they require a serial number, password or specific user details, even build in a web browser for a customer only section.

You could even have one of those free on line PHP based chat rooms and integrate that code so disk users can access the room. Set an expiry date on the disk. You can also add samples of music rather than full tracks OR integrate the music within the disks code (so their are no actual MP3 files on the disk) When regarding piracy you could also embed data within the disk so its personalized to who ever its sent to (this is something crackers & hackers "how ever good they are" will never find)

Even to compare 2, 3 as many copies as they want, it'll be impossible to find the embedded information that would lead right back to the person pirating your work..
It wont stop piracy, but it'll catch who does it & help you prove their accountable for the leak.

ps...
I am considering looking into making a custom iPad app, but that's a while down the road..