Music From The Movies 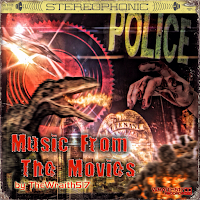 As a kid I would often look at the random cassette tapes in Woolworths & TJ Hughes, those movie and tv theme tapes. You probably know the ones i mean, them crazy compilations full of classics from the likes of

"Some Dude and his Orchestra perform Hits from Some Random Whatever"

I didn't get to watch much tv or listen to much music when i was younger, in fact tv themes and bbc's cfax music used to be as close to music as i got. One Christmas i was given a Walkman and two tapes, i will never forget it. It had Play, Fast Forward and Stop, looking at the tapes i had no idea what to expect, and as i unwrapped 2 Agfa 90 minuet blank tapes, that where new & blank, their i sat totally at a loss and truly gutted. They did get me a keyboard years later for some unknown reason, though its the only thing i ever asked for (besides to listen to music and hear the tv) so i guess they figured to hell with it. As a child i had no sense of smell, my brain adapted around that and my eyes and ears got more brain power than they should have.

My older brother ended up filling the tapes for me, the beatles, early genesis, pink floyds the wall, he also ended up passing me jeff waynes war of the worlds and the best of the doors. I was on fire inside with no idea why. A few years later my old man put on some Vinyl LP of Geof Love and his Orchestra do Western Themes and it just blew me away. The music bug i had and no clue a to why, but the brass and the strings where just WOW.

What i have spent the last couple of days doing is re-creating some of the music i remember the most, some of my earliest memories of music i heard that i got truly gripped by. Ive also been working on some music from modern Films / Tv Shows that truly moves me or perked up my ears. I have also been digging deep into the back of my mind, humming music (the little moments most ears miss) and i decided that be it old or new, i will do some tracks that limit in places and boost in others. A collection of tracks people know and love, yet altered in such a way that the every day listener can better hear some amazing moments often lost on so called untrained ears.