Airwolf Editor Raises The Bar And Sets The Standard....

Its rare i watch stuff on youtube these days, its mostly disappointing and very cliche, but now and then something truly blows me away...

Most of you no me for my Airwolf combat edits.. yes they were prity kewl, but as you also know NBC Universal banned most of them due to the content & the way youtube scans for them...

Anyways theirs a rising star out their doing truly amazing airwolf edits and is managing to reduce the (c) issues with the way hes working (all's i can say is this one has the patience of a saint) lol
hes got a couple of videos up at the moment, the 2nd one also features some of my music which has been truly awesome to hear it & see the action that runs along side it

If you thought my edits were prity good, then you MUST take this rare opportunity to check out the work this youtube user has put together,  part 1 & 2 are already on his channel, I like them both, but i do think part 2 is better than part one.. no.. not just because my musics in it lol, i think the editing is faster paced, shorter shots, part 2 runs very fluid & easy and mix's and matches in all the right places for all teh right clip lenths making it as visually sweet as hollywoods finest and much better than the original 80's editing


well i was wondering if ide been Reported for cheating OR if their system had problems, or if someone had bought me stats to get me binned out the chart.. and ya no what  : /

now i would post it an let them no, but we all no they don't actually care
and alls ide get is a ticket number that means nothing and a survey that also means nothing

so way to go reverb... another screw up that wont get fixed until at-least 8000+ people close their accounts
kinda sad  thats what it takes to make a company sit up and listen to the people who keep them afloat

also still pains me that their still refusing to acknowledge they have accepted Visa Debit cards in the past through audiolife, but just cant be bothered paying for the international transactions on them any more since paypal changed its commission rates for overseas purchases via debit rather than credit...

so the moral of the story is you can sit at number 1 in the world and be nagged about free promotion...  but if 20 people play your song today and 100 play it tomorrow, then you cheated and get booted?
WTF  LMFAO....

A while ago Audio Life that manages the  sales of reverbnation artists stopped accepting my Visa Debit Card and insisted that they have never accepted them and have only accepted Credit Cards
I have TWO invoices that Dispute that, but apparently no one cares because im wrong : /

My chart listing is now just a  - Sign/Symbol


Thanks for the email. It appears that your account has been flagged by our system due to song plays or fan growth that it has deemed ‘suspicious’ (may have been created in an automated way or through a paid 3rd party site). Your account will not appear on any ReverbNation charts for 31 days following the most recent ‘suspicious’ activity. Stats found to be fraudulent may be removed during this time. Please note this suspension period from the charts does not hamper your daily use of ReverbNation or your ability to access and promote your music/content. Your account will return to the charts automatically without any action on your part should no violations regarding the terms and conditions of ReverbNation turn up. If you feel that this was done in error, please complete the appeals form via the link pasted below so that your appeal may be considered. If your appeal is accepted, your account will return to the charts sometime before the 31 days is up.
***PLEASE DO NOT CONTACT CUSTOMER SUPPORT ABOUT THE STATUS OF YOUR APPEAL, AS THAT IS A SEPARATE DEPARTMENT. FOLLOWING UP WITH CUSTOMER SUPPORT AUTOMATICALLY NULLIFIES YOUR APPEAL, AND YOU MUST WAIT THE FULL 31 DAYS.***
Appeals form can be found here:


Firstly i never sent an Email..
Secondly i can't afford 3rd party services
Third... did they not realize that reaching number ONE in the world would Increase Traffic
(ive been featured on other blogs, ive promoted with a Music Give Away)
thats besides the fact my music is prity dam good considering my equipment....

Now.... if i am to understand this right, i need to STOP promoting my music, i need to DISABLE my widget, because clearly my .NET tutorial made my blog to popular and in turn my widget received to many song plays...

I need to beg all these RAP STARS to STOP ADDING ME TO THEIR FANS LIST
And although i WAS number 1 in the world i need to STOP getting fans...

My stats are stable


So a lesson here i am seeing is if an artist stuck at number 2 has some funding
RATHER THAN RISK HIS OWN ACCOUNT
all's THEY have to do is spend a few dollars to buy you some fans on a site and BANG
their number 1... and your gone...

Interesting and clearly ANOTHER NAIL into my dealings with reverb nation

and being their with BASIC STATS would of also been honest

but i have just learn't today that ANYONE can get you thrown out the charts for a mere $2.99 a month
(that's about £1.52 a month to keep your rivals at bay) by simply backing their rivals account instead of their own account

doesn't this also mean i can no longer work on my own blog because MY pc is accessing the blogs widget?

see when people start googling  "Reverbnation Missing Rank" or "Rank Now A Hyphen"
that will affect my reverb stats while you guys are reading this   to which WTF is the correct way to get publicity and stats besides by helping OTHERS,  rather than paying for fake ones    : /

Begs the question, if im number 1 in the world.. and actually miles ahead of anyone else
why ide actually need more fans.... to which this is how it looks now that i am essentially Invisible 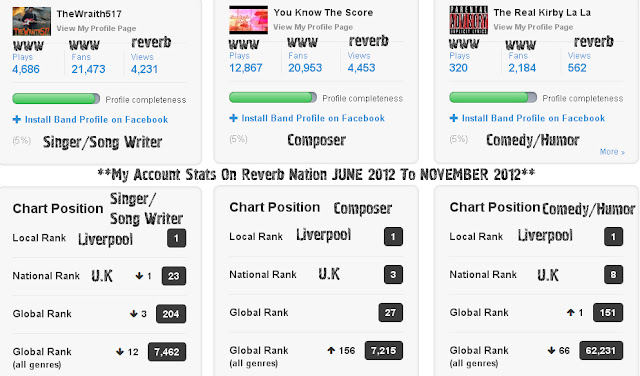 Here is a random reason why stats get elevated all on their own... 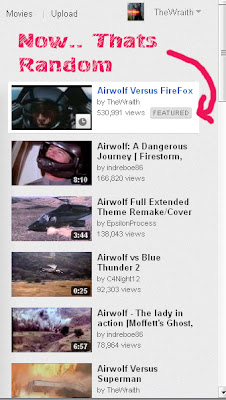 When you watch "most" of my music videos, you'll notice im normaly Featured in YELLOW at the top with TWO of my other  music videos...
using google spider to enhance your Coverage is bog standard marketing....
I don't pay anyone to get featured...