I Looked Back And I Saw Her Die

How The West Was Fun The Magnificent 6 & A Half

Adagio In D Minor has been Licensed With Actual Lyrics 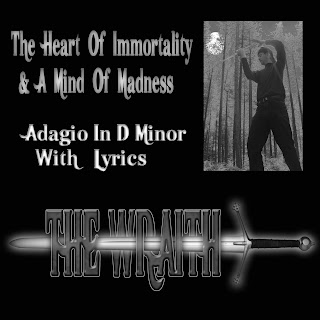 For the first time (to my knowledge)

Adagio In D Minor has been Licensed
With Actual Lyrics

"The Heart of Immortality & A Mind of Madness"

It's pretty cool, if you like Highlander its even cooler as the lyrics are related to the movies & the series character & mythology, please re-share if you like it.

I was looking for a piece of music for a Highlander Fan Film we were working on (this was before i started taking my own composing seriously and was using others music in my videos)
The track just blew me away so much that i started singing along with it & hit stop, i grabbed my guitar, un-muted my mic and just went for it, no writing was ever done & it was a one shot take.

I later put a video together for it and also used some of the dialogue from a couple of the highlander films & episodes (that ended up getting it banned by Lionsgate on youtube)  The video featured footage from a number of episodes along with custom visual effects and some footage from an Adrian Paul movie "Nine Miles Down"  Sadly the video is no longer on the internet, although their is a small sample of it Here on youtube... (unless that gets banned to) 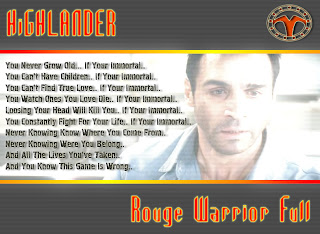 Sadly we can't use that artwork for the release, to many issues licensing the logo, the video still and the Highlander branding....

After the video was banned it lay in a folder along with the MP3, but was still being shared by people in Highlander fan circles around the world but couldn't be legally placed anywhere.. Until now..  With the help of Loudr FM (and the removal of the 3rd party copywrited dialogue) We have managed to acquire a license to legally distribute this song on iTunes.  Royalties vary on using peoples compositions, in the case of sales for this song the royalties go to John Murphy (original composition) TheWraith517 (Lyrics & Performance) Loudr FM (Take a % for licensing & distribution)  so as you can imagine i won't actually earn much from this.. but remember this is only "sold" because its the only legal way to share it with you...

So try not to grumble about the price lmfao

If you like this song, then you might like Farewell To the Rogue Warrior which can also be found on Amazon, GooglePlay and Spotify (as i own all the rights to that so it can be posted anywhere)
Including the video version i have online Here

Things Will Never Be The Same
Everything You Knew... Was Gone

Clouds Are Commin....
And Your Time Is Finally Here

The Sound Of Gods Delay 001

Yet Another Heist Movie

Email ThisBlogThis!Share to TwitterShare to FacebookShare to Pinterest
Tags: QMPKX1318189

Email ThisBlogThis!Share to TwitterShare to FacebookShare to Pinterest
Tags: QMPKX1318188